The Truman Show by Peter Weir: Who is the true man ?

The Truman Show is a master piece, directed by Peter Weir in 1998. To bring this story to life, Jim Carrey is enlisted as the main character ! He perfectly illustrates the emotions of the movie, and he received his first Golden Globe with this role.

The story is the life of Truman Burbank, star of a reality TV show without his knowledge ! Since his birth, his world has been a gigantic film set and all those around him are actors. He is the only one to ignore the reality.

The movie explores his first doubts and his quest to discover his purpose in life. Truman has been chosen from birth to be watched by millions of people every day on live television. The concept fascinates viewers, who show an obvious affection for the one they have watched grow up. The perfection of the decor seems a little bit grotesque compared to reality. It is remarkable in the details like the pretty little houses, the cleanliness of the town, and the big smile of the actors who bring it to life. This seemingly ideal place does not really satisfy Truman, and the tidy daily routine that punctuates his life is interrupted by suspicious events that make him wonder.

TRUMAN AND THE ALLEGORY OF LIFE

It’s interesting to see that in this story, the goal is to recreate a life – but far better – that anyone could live in. Everything is more pleasant, because everything is chosen, and calculated. One might ask, what makes a life credible in this case ? The conventions Truman respects do not seem to surprise him. He is used to his world which does not resemble reality. The movie makes a critique about society, and sheds light on different issues; the importance of TV within the society, the voyeurism behind the TV reality programs, and the power of what people see on the screen.

In a commentary about tv reality, the viewers end up watching a movie within a movie in which the actor does not know he is being watched by spectators! We could ourselves be in the same situation than Truman. And what is interesting is that in The Truman Show, there is a new dimension of entertainment, brought by cinema. We can understand the importance of cinema, of the entertainment as creator of life and experience : but what is more exciting than watching the life of another ?

THE REALITY BEHIND THE TV 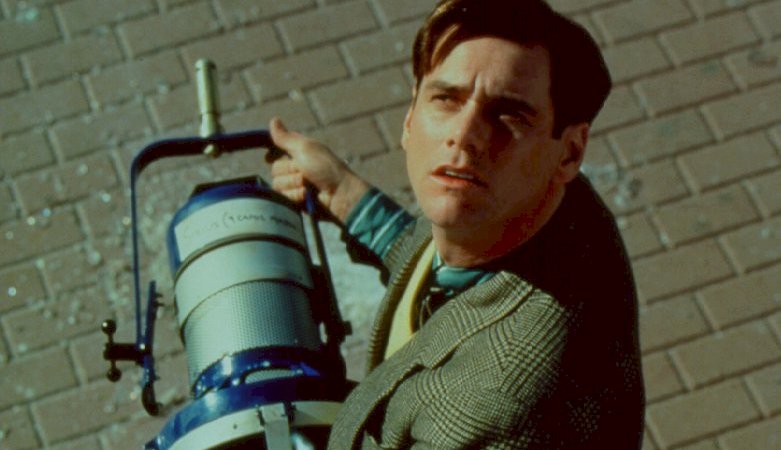 In reality, actors who participate in a film know it is fiction and are bound by a contract. This is the case with the actors who surround Truman, but it’s not his. Moviegoers are voyeurs in Truman’s supposed life of leisure. We know that it’s wrong to watch Truman without his knowledge, and are glad to not be in his place. Ethical and moral questions are raised throughout this film. Truman’s life belongs to him by right, and yet that is not the case in the movie, because he is dependent on a system of which he is ignorant and does not master.

The Truman Show is a criticism of TV Reality, taking it to the extreme. It demonstrates the voyeurism shown by spectators who agree to watch the life of another 24h/24h. They are represented as characters, always doing the same actions in front of their television. The most striking is a man taking a bath in front of The Truman show. He is in his bath during the whole movie, even though days have passed in the TV show. It’s important to understand that the film is addressed to the viewers. We are actors in our own life, like Truman. There is a message of personal development. It is to continue our quest, despite the life that is imposed. Just as Truman does by planning his escape, we should venture beyond the walls that are erected.

THE ALLEGORY OF FAMILY

There is a special relationship between the director of the program and Truman. Mirroring not only the relationship of a god and his creation, but also that of a father and his son. Truman is an adopted child, choosen for the TV show. His actor father left the set when he was a child. For his departure, the realisator decides to traumatize Truman with a boat accident. The city being bordered by a false sea, he will no longer dare to venture outside, which is the goal.

But finally when he braves his fear and flees far from the cameras in his boat, it is the confrontation with his father, the director of the programmation. Because when Truman escaping his look, he confronts parental authority. We can see in that scene the emancipation of any child, born into a family that creates a universe for him and for his well-being, but who wants to leave to discover the world, and create his own. His departure is very moving, and the aesthetics of the scene very gripping. He find a door hidden in a wall of blue sky, bearing an exit sign. And so his life begins.

The Truman Show is a cult classic of the 7th art. It is made so, as much by the codes which it exploits with wonder as by the original idea and the acting.